Skip to content
Home » Blog » Would Your Kids Pass the Marshmallow Test? 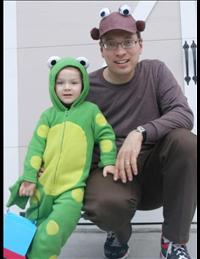 When I was a kid, my absolute favorite stories were from the Frog and Toad series by Arnold Lobel.  I am so thrilled that my two-year-old son inherited my passion for the stories about the two special friends.  In fact, this year we decided to dress up as Frog and Toad for Halloween (my son assigned me the role of Toad – I’m trying not to read into this too much).

One of our favorite Frog and Toad stories is entitled, “Cookies.”  In the story, Toad makes the most delicious cookies and invites Frog over to enjoy some.  They keep eating the cookies over and over again.  At one point, they both agree that they should stop eating cookies otherwise they’ll be sick.  They keep vowing that they will have “one last cookie” but continue to eat more (my son and I both relate to this scenario).  Frog mentions that they need willpower.  When Toad inquires as to what is willpower, Frog explains that “willpower is trying hard not to do something you really want to do.”  Toad asks, “You mean like trying hard not to eat all of these cookies?”  They devise various schemes to keep the cookies out of their reach but eventually decide to remove the temptation altogether by giving them away to the birds.

Mischel checked in on the children as they grew up and discovered remarkable results.  Those children who exhibited willpower in the study turned out to be more independent, had higher salaries, were more respected in their communities, and generally led happier lives.  The researchers believed that willpower is not an inherited trait but rather a skill that can be developed.

Estate planning attorneys took note of the results.  If willpower – or delayed gratification – leads to happier, more successful lives, can there be a way to instill this value in children through an estate plan?  Inheriting an estate without any limitations does not teach delayed gratification: sudden wealth without any capacity to responsibly manage it can lead to ruin.  However, if an estate plan creates incentives for children to become responsible adults, they will develop willpower which will give them the tools to create successful and meaningful lives and allow them to manage wealth responsibly.

Often such estate plans will identify certain “benchmarks” such as attaining a Bachelor’s Degree, attaining a graduate or professional degree, attaining gainful employment, or performing community service.  For each “benchmark” achieved, the estate plan will distribute cash or other assets as a reward for these accomplishments.  This method of eschewing an “all at once” inheritance by transferring wealth in increments and linking the transfer of wealth to self-attained achievements creates a delayed gratification scenario that trains the children to develop willpower and hopefully lead happier and more successful lives.

Perhaps a good way to determine if your children need this kind of plan is to leave them alone in a room with a cookie or a marshmallow and see if they can resist the temptation.  This experiment might even be more revealing if your children are adults!

If you’d like something to lift your spirits, take a two minute break and watch an updated version of the Marshmallow Test at this Youtube link.